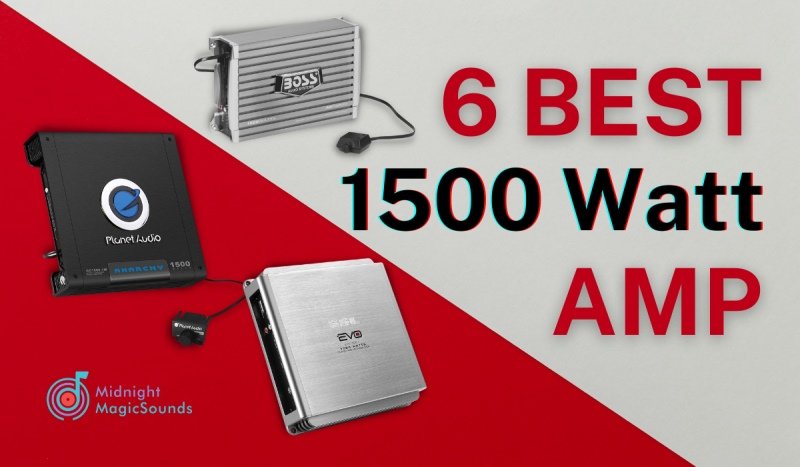 Upgrading your vehicle’s audio system can be a daunting prospect. It can be hard to know what your vehicle will take and what will best suit the space inside your car to get that sound you want.

Whatever your profession, it’s pretty unlikely you’re directly involved in music production, so you only have your own knowledge and what the internet tells you as a guide.

Of course, there’s no limit on the number of options you can purchase, which is both a positive and a negative. For one thing, it means you have a wide array of products at various prices that you can choose from.

But that also means there’s plenty of room for confusion. Between subwoofers, receivers, and amplifiers, you might not even be sure what you need.

Usually, if you’re trying to improve the sound quality, you are looking for an amplifier. An amplifier’s primary job is to enhance the small signal from your receiver. In this blog, I’ll be going through the six best 1500 watt amplifiers for any automobile.

Every channel on an amplifier is another discrete power source meant to power one specific speaker. How many you need is going to depend on your speaker setup and whether or not you have plans to upgrade it further.

Amps are typically classified by class or rating. These ratings are determined based on their features and the circuitry’s design.

The classes are Class A, Class AB, and Class D. Class D’s are often considered good for their bass pick up, but you’ll have to experiment to decide which is best.

Before purchasing a car amp, one important thing is whether or not it will even work with your car. Be sure to check beforehand.

Recommended: How to Connect a Mixer to an Amplifier

Installing an amplifier in your car is not a complicated process, and you can typically do it by yourself. Repairs and upgrades, however, are better left to a professional. Make sure you have someone in your area familiar with the brand. If you’re looking for an incredible bass boost, look no further. Planet Audio may not be the most well-known brand, but it’s certainly making a name for itself. Founded in 1997 by some businessmen who were enthusiastic about car audio, the company’s been slowly growing from its base in Oxnard, California.

I don’t know about you, but the bass is incredibly important for sound systems. You don’t need to listen to extremely deep funk to understand a solid bass line’s power on a track. Planet Audio’s amplifier managed to perfectly accentuate the bass on any song without any of the grain that you get in a cheap car radio.

The bass is excellent, and there’s even a remote subwoofer included to ensure maximum convenience. By the time I adjusted it to my liking, the bass had come through with such crispness it felt like a live show.

Probably the handiest aspect of a Planet Audio is how easy it is to adjust the bass if you feel there’s too much grain on the track. For the price it’s currently selling, it’s not likely you’re going to find an easier-to-use amplifier that delivers fantastic sound. If you’ve never installed an amplifier before, this is probably a great product to start out with.  Numerous people have written about its easy installation, which is only a matter of following the instructions. Once it is installed, the first thing you’ll notice is that this is one handsome amp. But it’s not all about aesthetics.

BOSS’ AR1500 has great A/B linear circuitry. This means it can work at extremely high outputs without any distortion.  At least, that’s the claim.  There was some minor distortion when the levels got really high, but it was barely noticeable.

One of the best features of the BOSS is how many of its features are entirely customizable. Unfortunately, that’s also one of its biggest drawbacks, as it can take a lot of time getting used to adjusting things how you like them.  Overall, it’s one of the best-selling amplifiers on the market for a reason, and that’s because it delivers excellent sound quality.

BOSS also has a safety feature that will automatically shut it off should it start to overheat, making them one of the safer options. Ideal for those who really love to rock out loud music, the Planet Audio TR1500 has a maximum of 1500 watts at 2 ohms and MOSFET power.

It’s also a nifty-looking amplifier, with blue light emanating from it. While personally appealing, some drivers may find this feature a little distracting when they’re trying to pay attention to the road.

The MOSFET power is one of the most in-demand supplies on the market. It’s a magnesium-oxide supply that is more efficient while operating at a lower voltage.

It features both high and low-level inputs. These amps were made to power the subwoofers, and that’s exactly what they do. The sound is crisp and clean, with just the right amount of bass. Better still, the remote subwoofer lets you easily control the volume.

There have been some reports that the amount of wattage has been grossly overestimated by the company. In fact, some people claim this is a problem throughout the brand. But as far as the Planet Audio amplifiers I purchased were concerned, their output delivered seemingly exactly what they promised.

The Planet Audio TR1500 lists that it delivers 1125 watts of power to speakers and subwoofers, and that is precisely what it does. If you aren’t getting that much power, there must be an issue with your speaker system. Do not let the size of the Audiopipe fool you, as it packs quite a lot of power in its tiny frame. Its tiny size is only to allow it to fit in your car more easily and does nothing to take away from the sound.

As long as it’s paired with a good subwoofer, the Audioblock Class D has all the bass you’ll need. It’s another loudspeaker and one of the best on the market. You don’t have to be Phil Spector to understand what sounds good, and this amp managed to blend the bass in with the rest of the instruments seamlessly when necessary, making it stand out when it should.

This machine is, as one user described, a “beast.” It can handle whatever you feed it, provided you’re not intentionally putting it at unreasonable levels. One of the most impressive aspects of the Audiopipe is that it’s able to run for hours without even getting warm, much less overheating.

That’s one of the best features of a class D amplifier; they have the ability to work overtime without overheating. It’s the primary reason to choose Class D.

If there’s one issue with the Audiopipe, it’s a fairly minor one that shouldn’t affect the sound quality, but it potentially could. The packaging is lousy. It’s not well protected, so if you’re getting it shipped, it could get damaged. There are many things to consider when you’re trying to pick the right amplifier for your car, the least of which is cost. How much you’re willing to invest and how much you’re expecting for your money is going to narrow your list of options considerably.

The Sound Storm EVO1500 is one of the best amplifiers that one can purchase for its price, however, the price should make one realize that it’s not without some limitations. Essentially, you get what you would expect for around a hundred dollars. But that still includes a remote subwoofer and a six-year warranty.

The Sound Storm provides solid sound quality with little distortion, enhancing the subwoofers with more clarity than crispness.  It might not be one of the most elite class amplifiers on the market, but when you’re on a budget, this is the model for those that know how to distinguish.

It’s also well-protected, with built-in features to prevent overheating. This makes it ideal to use in small enclosures without concern.  Overall, this is a reliable, strong system for any automobile at a great price. Small and compact with a MOSFET power supply is ideal for any device, but this Power Acoustik is also easy to install and offers stable, powerful amplification. The biggest issue is the blue light, which we’ve discussed before and is really just a matter of preference. If you can ignore it, it’s never going to be an actual problem.

To be perfectly honest, there wasn’t much difference in the sound quality offered between this and the Sound Storm. Both are about the same price, and that should ultimately determine which one you pick.

Ultimately, it’s up to you which car amplifier you choose for your vehicle. Your decision will likely be based on a lot of factors, including cost, sound quality, and ease of installation. But a car amplifier will transform the sound in your vehicle, vastly improving it.

Now that you know the best 1500 watt amps on the market, it’s time to further consider what you should be looking for in such a device. There are several factors that make an amp worthwhile.

How Much Power Does a Car Amp Draw?

Provided everything is working correctly, a car amp usually draws between 10 and 30 amps of power.

What is the Most Efficient Car Amplifier?

The Alpine PDX Series is the most efficient brand on the market.

Will an Amplifier Improve Sound Quality?

Any amplifier’s central purpose is to boost the sound so that it overcomes traffic noise outside. This naturally improves the sound quality, making it crisper and clearer, though some amps are just better at this than others, with less distortion caused by the volume going up.

Can I Use a Car Amp Without a Subwoofer?

Yes, provided the amplifier has an appropriate crossover built-in to prevent it from playing at subwoofer frequencies. With the proper crossovers, the amplifier could run the risk of blowing out.

Recommended: How to Connect a Subwoofer to An Old Amplifier?

Class A/B is the most common class of amplifiers, and it offers the most power with the least amount of distortion. The only issue is that they tend to consume a lot of power, making it possible for them to overheat. Class D amplifiers, however, are much more efficient, producing less heat.

How Are Car Amplifiers Installed?

The most important aspect of a successful car amp installation is that the wires connecting them are the right size and type. Your car’s regular internal wiring may not be able to handle the high-current demands of the amplifier.

Some amplifiers are capable of drawing 50 amps at high volume. The factory wiring in your car isn’t made for that, and as a result, the amp would lose voltage. The cable connecting the amp has to be large enough to handle that much power.

How Are Car Amps Beneficial?

Beyond just improving the sound, amplifiers have numerous benefits in cars. At most, car stereos on their own typically produce only 15 to 18 watts per channel.  At high volumes, especially if you’re also driving, that power is not going to be able to give you good sound. At the very least, it will come with a lot of distortion.

Car amplifiers give you a much cleaner, crisper sound with less distortion, particularly if you listen to music with a lot of basses. In certain cases, amplifiers are the only option you have to make the sound in your car better. For instance, if:

But there are benefits beyond just being able to enjoy your music louder. The sound starts to break up at louder volumes. Other features, such as built-in crossovers, help further prevent distortion. Factory stereos aren’t made for this.