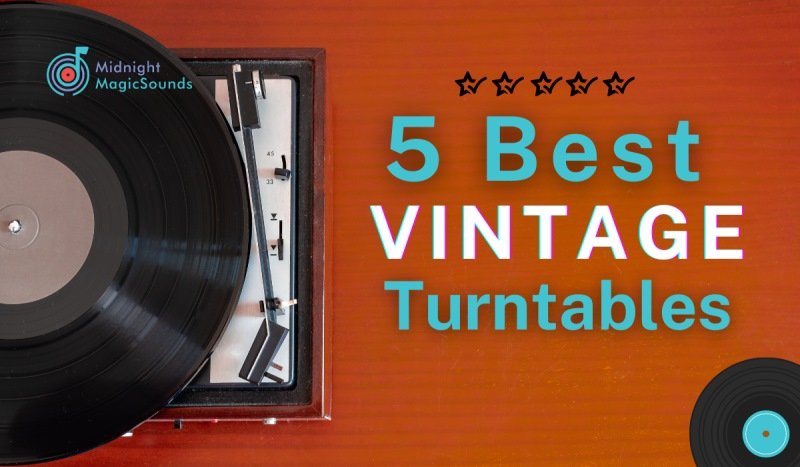 The trend of finding vintage equipment and furniture has gone beyond the hipster.  It used to be an image problem, these young, entitled trust fund kids with patchy facial hair dominated the market, desperate to find that perfect dress or leisure suit at a thrift shop.

They bought it because it was tacky – that was the charm.  It didn’t take long, however, for the rest of us to catch on. When we visited their unnecessarily lavish apartments, we couldn’t help but notice they had some pretty nice stuff, so we started shopping at the same stores. This happened around the same time vinyl came back into fashion.

It was a perfect confluence of events, and people everywhere were dying for their own vintage turntable to play their records – new and old. It’s an intergenerational music appreciation sort of joy, and thankfully you don’t have to spend a fortune anymore trying to recreate the past.

What to Look For in the Best Vintage Turntable

When shopping for a vintage turntable, how well it’s built is obviously going to be a factor. The first thing you have to realize is that the components put in older record players were never really that great, so you’re searching for a device with suitable upgrades.

This is especially important for the speakers. In the past, the built-in speakers were cheaply made, often described as tinny. People used them because they didn’t have access to much else that was as convenient at the time.  Today, a vintage player is going to have a speaker system that’s far more advanced.

Beyond whether or not it looks vintage, it’s important to know how sturdy it is. The old record players were indeed built to last, the hardshell suitcases they were put in were there to protect it. You’ll want to make sure you have the same kind of protection.

There are some specific materials that will work better than others.

Steel: What they used to use back then, they still use today. Steel is strong, durable, and offers some vibration resistance.

Aluminum: Aluminum is an excellent material that both protects and offers great vibration resistance.

Plastic: Plastic is obviously the weakest of the three, and it was used in mass production when record players were first popular largely because it’s so cheap.  But with cheapness comes problems, like terrible vibration resistance and the very real possibility that the plastic could break.

The stylus, or needle, makes a lot of difference in vintage turntables. What you’re ultimately looking for is precision, and diamond-tipped needles are far and away from the most precise on the market.

Ruby styluses are also acceptable, and there are some stronger metal ones that still do an admirable job.

There are two main categories of tonearm: straight and curved. Though it’s debatable, straight tonearms have a better chance of ruining your records over a long period of time.

It’s much more advisable to stick with a curved tonearm, even though this is far from a settled debate.

How big do you want your turntable to be? Some, like the Electrophone, are going to take up a lot of space. For some people, that’s perfect for their living situation, but others require more compact devices, particularly if they’re living in a cramped area.

Record collectors can be obsessive, with a catalogue often taking up entire walls of space. So it might just be smarter to stick with a smaller, briefcase-sized turntable. Ultimately, it’ll be up to you, but the decision you make should be something you’re comfortable rocking out with. One of the reasons record players fell out of style in the 70s, giving way to other technologies that were short-lived, was that they only were capable of one thing – playing records. Back then, it was considered a limitation. Their speakers were usually pretty poor, and they often had other cheap parts inside, so eventually, people looked for other ways to listen.

The Victrola has brought a whole heap of nostalgia in design, but not in audio quality. The old suitcase contraption in which the turntable is held is appropriately grainy and worn-looking, but the speakers have gotten quite the upgrade.

The Victrola’s interior has been completely upgraded, in fact, with modern components that are far more reliable. The machine includes add-ons that weren’t even possible back in their heyday. You would have never even thought this device would be capable of streaming, but Victrola ensured it had been fitted with many modern conveniences.

It’s the conveniences that make the Victrola so desirable. Lightweight and portable, you can easily set it up at any party or social gathering.

The knobs and switches are an especially nice touch, really feeling and looking like something from the past. And you’ll never have to worry about unplayable records, as the Victrola has three speeds that play even the older albums.

The audio is better, but it is still just a record player with built-in speakers, so there’s really only so far it can go. For a record player, however, it performs admirably, producing a decent sound that you’d never get 60 years ago. When it comes to vintage design, Crosley went all out. Forget that the machine is a little goofy – that’s how they looked back then!  And there’s more than enough charm to be found in its boxy, uncomfortable-looking frame. It’s the kind of odd look that works surprisingly well amongst any interior design setup.

The Crosley, however, has much more to offer than just a gorgeous replica. The legs are thin, to the point where they almost look breakable. However, they’re actually quite sturdy and entirely removable if you have another setup in mind.

When it comes to the audio presentation, Crosley does a bit of complicated multi-tasking, balancing its Bluetooth receiver with built-in speakers from Dansette Bermuda.  These are probably the most impressive built-in speakers on a record player.

Unfortunately, though, it makes one wish that they used Dansette for all of its components, as the tonearm is not as high-quality as it should be. It’s a thin, fairly flimsy piece of inexpensive metal. One would probably want to upgrade to something more dependable.

It would also be an improvement if it were capable of playing all three speeds, making it truly a relic. Still, you have to love that green cream color that looks as though it were plucked from a marquee from a local sock hop. One of the major problems a lot of new record player owners have is setting it up.  It shouldn’t be terribly complicated, it’s just a matter of a few wires and finding a place where the sound can really fill the room. The problems begin when the knobs and dials come into play, and you have to fiddle with them to get the right levels.

This isn’t so much of a problem with Fluance, as the company has made it as easy as possible to understand how to get the most from your record player. Easy-to-follow Youtube tutorials are online that really do a thorough job explaining the subtleties of its design.

Furthermore, should you still have problems, Fluance has a 24-hour customer service line ready to assist with any questions you might have.

The device is not without its share of issues, however. Probably the most serious of which has to do with the speeds, which the belt drive has a problem staying committed to. It’s a small problem that could grow into a very big one when it starts destroying your records. The Electrohome is far from the sleek, suitcase-sized designs that you’re usually looking for, but that doesn’t mean it’s not something you should consider. In fact, there’s quite a bit of charm to the Electrohome’s big, bulky, almost unwieldy design. It’s the kind of clunky thing you’d find in a 1960s home, and the patriarch would brag about its girth.

We’ve gone the opposite route in what we value. Bigger is no longer better, and we tend to strive to keep things as compact as possible just to make room for quantity. The Electrohome is a callback to when we didn’t have or need so many creature comforts, and perhaps it’s a suggestion we return to simpler times.

You hear a lot of talk in record appreciation groups about the warmness of the sound, but it’s hard to define exactly what that means. The Electrohome does a good job explaining by example, filling the room and your ears with the pleasant vibrations and notes of artists you personally favour. When it fills the room properly, it gets overwhelming.

That overwhelming sense can be enveloping, warm even. That’s what the Electrohome offers. It’s a solid sound without the need for much fiddling with knobs.

Of course, there are some who just will never appreciate something so large taking up room in their homes. To each its own, as this device may be oversized by today’s standards, it certainly pulls its weight.

5. LuguLake Record Player Retro Turntable All in One Vintage Phonograph Talking about vintage, the LuguLake is truly a blast from the past. That gorgeous, long brass horn is the kind of touch you’d find in drawing room mysteries and classic, Victorian dramas, or you’d expect to hear the panicked voice of Orson Welles announcing an alien invasion. It’s a splendid design, bringing to the fore all the nostalgia and heart-tugging longing for days past you wanted.

It’s why it’s such a shame that it only plays two speeds. This is a baffling loss, as it looks so old-fashioned, you’d expect it to behave as such.  Fortunately, though, it does have the AM/FM radio, which can make you feel a little aged.

The sound makes up for what it lacks in capability. The brass horn is fitted with a 10W tweeter, allowing it to reach levels never possible back when it was in style. The ruby stylus works almost as well as a diamond, to the point where we barely noticed a difference.

It’s a beautiful machine with a full-bodied sound that really looks like it was transported from another era. In short, it’s exactly the kind of device you want when you’re shopping vintage.

Now that you know the best vintage turntables on the market, it’s also important to know what you’re shopping for. What truly makes something vintage and what upgrades have been included will help you arrive at your final decision.

How Much Should I Spend on a Vintage Turntable?

How much you should spend on a turntable is a question that’s going to be decided by many mitigating factors, including your budget, living space, and base of knowledge.

Obviously, you don’t want to start off with a professional-grade turntable if you’re just starting out, you run the risk of ruining your record collection.

For beginners, a good price for a turntable is anywhere between $100 and $400, though you can even find it cheaper if you don’t feel comfortable spending so much.